Sometimes amidst chaos dreams happen.  A trip to Italy…a trip of a lifetime; mine certainly was.

It was a very emotional and complex journey.  I took the 13 hour trek by myself meeting up with my son, Nico and sister, Sande in Rome.  I had a several hour layover in London.  The first sign of Italy was at the gate to board for Rome (FCO)…it came over me like a warm wave.  Every Italian waiting to board looked like my family.  Living in Los Angeles, the melting pot of the world, I wasn’t prepared for that.  Everyone in Los Angeles is as different as snowflakes.  I found it comforting.  The feeling grew as I began to explore Rome the first morning.

Nico had class so Sande and I set out to see the city.  I was hugely bothered by the graffiti although Nico assured me it didn’t have the stigma that we place on it in the US.  Again, I was impressed by the people, how they dressed and carried themselves and looked like me. Everyone looked like my reflection of my Italian side of my family.  Rome was so familiar; I could see how the influence effected how New York City was created by these immigrants.  It felt like finding missing puzzle pieces as we turned onto every new piazza.  I quickly understood the love affair Italians have with Art, Design and Architecture. I was making a pictorial of all things inspiring me.

Four glorious days in Rome.  It is a visually stimulating city.  The Trevi, The Pantheon, The Colosseum and The Vatican. Each inspiring on their own. Oh, and the Pope!  Food is fabulous and fresh…ohhhh those tasty tomatoes.   Walking cobblestones is hard on the body, but worth it non-the-less.  My favorite moment in Rome was when we strolled by the Pantheon after dinner and there were classical street musicians playing in the voluminous entry; so unexpected but perfect at that moment.

Florence walking from the train station Christmas is really taking hold of the city. And then you see it, the awe inspiring, Duomo.  Simply breathtaking, it takes your breathe away!  Smaller easier city to enjoy than Rome and no cobblestones to endure.  A few interesting moments I will never forget in Florence, “The David” no words can describe it and no words are necessary.  Sostanza a restaurant that is a kitchen with tables where you sit with strangers and enjoy 100 year old recipes of artichoke omelets and brown butter chicken.  Best meal ever, ever!  Enjoying the Boboli gardens I was waiting for Nico and Sande when a young girl about 8 or 9 sat down practically on me.  She went running off as fast as she had sat down making eye contact with me.  A few minutes later she was back with her family.  Again she sat right next to me on the bench and put her hand on my leg.  Her mother/grandmother were telling her to stop.  I told them it was ok, did they speak English?  The mother did a bit so I was asking where they were from and they said Carrara.  I immediately said that’s where my family is from.  We exchanged pleasantries…the little girl had one of those indescribable connections to me.  It obviously stuck with me.  Nico had his usual fans, crossing The Ponte Vecchio a group of young people were so excited they were sure they were having an Edward sighting.  Nico being the gracious young man he is, walked over let them take pictures and continued on his way.  It was a common occurrence no matter where he goes.

Nico caused a lot of confusion because he looks Italian…but he is an American through and through.

Venice was a picture come to life.  I felt very alive there…I couldn’t soak it in fast enough.  It was a cold and foggy day but that did not put a damper on my experience.  Stopped in the best café for a little pasta, cappuccino and Sande had the best hot chocolate with homemade whipped cream.  There was so much walking as there was everywhere in Italy.  No scooters or cars though which made it a bit more enjoyable.  There was just so much to see.  We put a lock of love on one of the bridges.  This was one of my favorite days.  I was so happy all day.

The surprise of Pisa; I wasn’t expecting much.  It was a lovely city less touristy then Rome, Florence and Venice.  Ice skating in the main piazza as you get off the train.  When you come around the corner and see the leaning tower it takes you off guard.  It is a beautiful building. But it is leaning….then back on the train and off to Cinque Terre.

The day we traveled to Pisa and Cinque Terre I had a few ah ha moments as we passed through Massa e Carrara area.  I was so tickled to even see this region where my fathers, mothers family was from.  The huge slabs of Carrara marble were amazing, stone yards after stone yards along the train tracks.  The snow covered mountains in the background.  I tried to image my family being there, living there.  What was it like?  My dad’s name on the stone yards Carlo Telara.  Did my family own one of these mines only to be lost in a card game?  So many questions.

On to Cinque Terre at sunset; just one unique breathtaking place after another.  Little colorful seaside villages that are built straight up the cliffs.  Fabulous dinner prepared by a local young man who was born there.

Flumocino; a most unlikely last two days in Italy.  I was so surprised by this fishing village.   Nico and I stayed in an ultramodern hotel right on the inlet where the fishing boats came rushing in by 3pm everyday and gone again by 1am.  Felt like home…the locals asked why there; to me it felt like a great way to decompress from all the traveling the previous 8 days.  Good meals, great walk in the most non-touristy place we visited.  Barely anyone spoke English there.  It was just a very small working village at the south end of Rome.  I was not sorry that’s how we spent the end of the trip.  It gave me a chance to relax before heading back to the US.

This trip was a very personal journey for me.  My love of family, genealogy…that desire to know where I came from.  The time was spent with Nico and Sande which meant so much to me…but what was even more important was that I felt like I was able to enjoy the experience in my own head.  Staying as present in every moment as I possibly could was a goal that I was able to accomplish.

Favorite Italian word: Allora; a three syllable word that virtually means “so”.  Loved the dramatic use of the word in conversation.

And although Nico was bothered by the following, our little inside joke…I found it endearing.

I hope the coin I threw in the Trevi brings me back again someday! 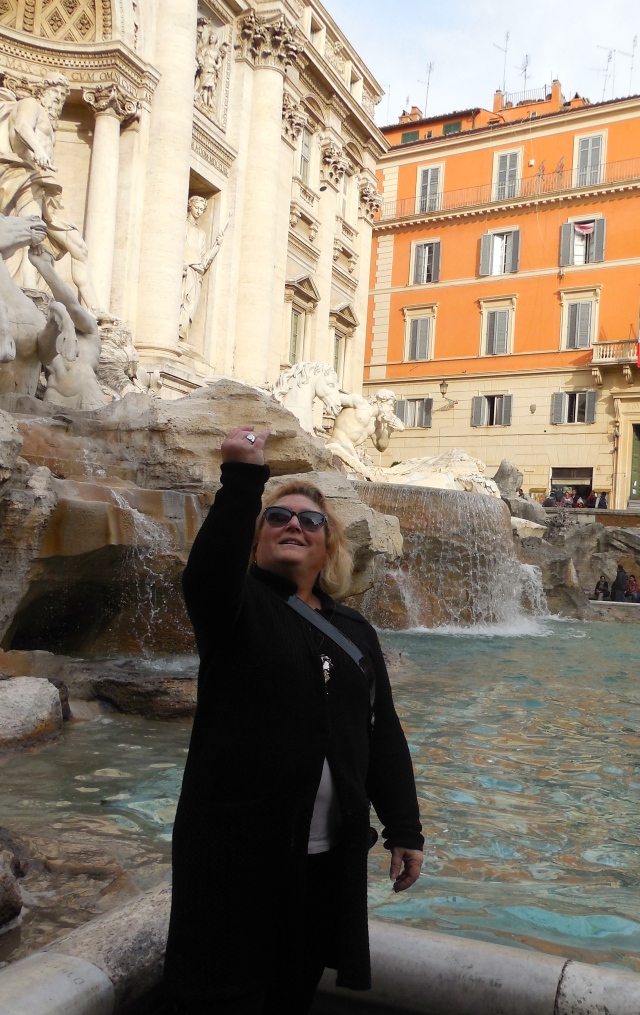